What to visit in Terres de l'Ebre

It is the extension of virgin land and the largest in Catalonia and most important wetlands in the Mediterranean lands. The mouth of the Ebro river, which gives its name to these lands, part of one of the natural parks with wildlife that make it unique and exceptional. With a total area of 7.736 hectares comprising the regions of Bajo Ebro and the Montsià.

Rafts are the Olles, Old Channel, the Garxal, L’Alfacada, the Platjola, Closed and The Encanyissada; and also Buddha Islands, Sapinya and San Antonio; peninsulas of Punta de la Banya and Fangar and fangs Baltasar.

With an agriculture that has in rice cultivation, one of its greatest exponents nationwide, in quality, varieties and exports worldwide. 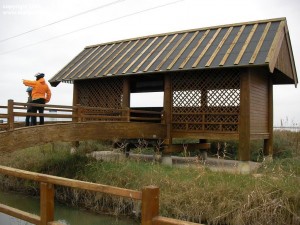 the fauna, it is also one of its strengths, as the birds, in unique native species and migratory passage, They make a point of interest in experts, lovers and scholars in the world of ornithology some land must see.

Birds They have a great importance in the area where quantifies between 50.000 and 100.000 copies 300 species different..

Climatic conditions and terrain, together with beauty natural, allow visitors to watch a show where the water of the river and the sea are the main players.

The varying degrees of salinity easy to be found a large number of fishes among them eels, mullet and croaker, living with introduced species such as torpedo. 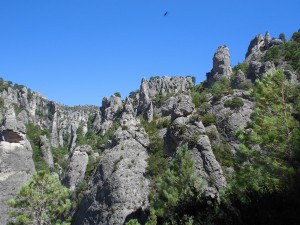 The Parc Natural Els Ports also hosts numerous attractions. Among their rock masses can be seen copies of goats ibex and vultures vultures among other species. There are visitor information centers in Roquetes, La Senia and Prat de Comte. 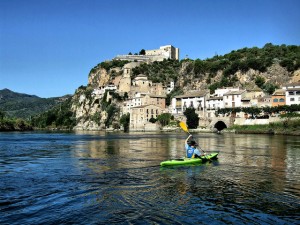 One of the most beautiful villages in the area Miravet, noted for its castillo, its medieval center and its location between rocks at the edge of the Ebro. Other small towns that stand out for their medieval town and its natural environment are beat and Arnes.

This town has an interesting architectural heritage, as his former castillo, whose foundation dates back at least to s.XII. But nevertheless, the most notable artistic sample is much older Ulldecona. We are talking about their famous cave paintings, some of them carried ago 10.000 years. Located near the Chapel of the Pieta, these prehistoric paintings are part of a wider set in 1998 It was declared Patriminio Site. We can also find examples of this historical set in Freginals, Alfara, Tivissa and Perello. 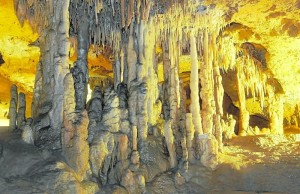 A good reason to approach Benifallet are caves, full of stalactites, stalagmites and other curious formations. They can visit the Wonderland Caves and the Caves of Two. You can also take a walk along the river “bRASS” (boat that was formerly used to transport goods by river) 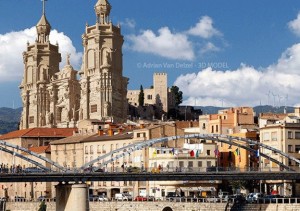 It is one of the most important towns in the area: 4Th in population of the province and capital Bajo Ebro. Although it was badly damaged during the Civil war, many notable buildings survive, as Suda Castle or San Juan (today Parador de Turismo), the Cathedral, the Royal Colleges, he Monastery of Santa Clara, etc. And this landmarks are added as the Prince Gardens, a Museum outdoor full sculptures. 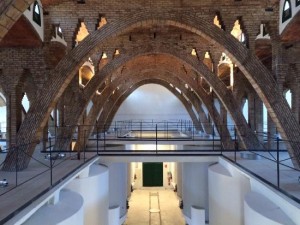 It was one of the main stages of the bloody Battle of the Ebro during the Civil war. his Center for Studies of the Battle of the Ebro It is essential to understand our newest black history. further, Waldo land is important wines (headquarters of the regulatory council of the D.O. Terra Alta). Its Cooperativa Winery Waldo, jewel of modernism, It is a must!. 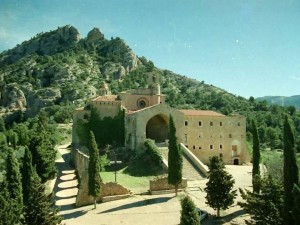 It is known as access point Natural Park of Els Ports and the area is ideal for rural tourism, sports of adventure, etc. A level visits, highlights especially the Convent of San Salvador, declared of Cultural Interest. 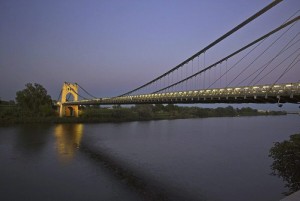 Capital Montsiá, is another important towns in the area and a good starting point to enter the Delta del Ebro. We can visit the Museum Terres de l'Ebre and his Suspension bridge over the river, symbol of the city.

The kitchen of the Ebro also has a strong personality and, both, two large areas marked by the geographical diversity: the kitchen seafaring and kitchen upland or Montana.
Account, Besides, some commodities with high quality: he rice , It produces delta 89% Production of Catalonia with protected geographical indication, the citrus –oranges and above all mandarins-, the wines whites and red, and sweet and rancid, DO Terra Alta, liqueurs such as anisette of Horta de San Juan, the ratafía or the schnapps Galley, and high quality oil, in Lower Ebre and Montsià, with D.O.

Kayak in the Ebro

One of the best ways to enjoy the Ebro is to make a kayak route. We can do it for free or hire guided tours.

Another great way to tour the Delta is by bike. Different companies in the area rent them at affordable prices.

In the Delta del Ebro you can not lose the opportunity to meet their rice fields, their traditional farming systems at parties plantings and harvest held in May and September, its typical fishermen's huts, his old navigation system and other local customs.

Both the Delta de l'Ebre and Els Ports is very popular Ornithological Tourism. From flamingos Punta de la Banya to the vultures in the mountains of Els Ports, hundreds of different species of birds gather in the Terres de l'Ebre.

This website uses cookies to improve your experience while browsing the website.. Cookies that are classified as necessary are stored in your browser, as they are essential for the functioning of the basic functionalities of the website. We also use third-party cookies that help us analyze and understand how you use this website.. These cookies will be stored in your browser only with your consent.. You also have the option to opt out of receiving these cookies. But opting out of some of these cookies may affect your browsing experience..
Necessary Siempre activado
Necessary cookies are absolutely essential for the website to function properly. This category only includes cookies that guarantee basic functionalities and security features of the website.. These cookies do not store any personal information.
Not necessary
Cookies that may not be particularly necessary for the website to function and are specifically used to collect personal data from the user through analytics, Ads and other embedded content are called non-necessary cookies. It is mandatory to obtain the consent of the user before executing these cookies on your website.
GUARDAR Y ACEPTAR